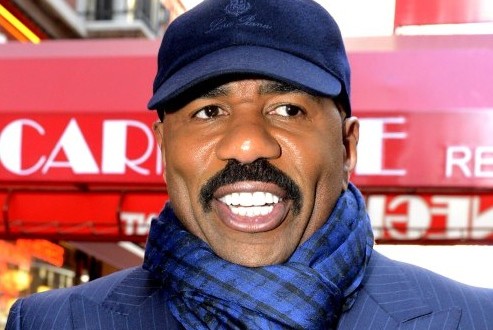 2.35 million viewers tuned in to daytime sensation “Steve Harvey” the week of Oct. 28, notching a series high for viewers P2+ and a series best 1.8 household rating —

Chicago, IL – November 12, 2013 – The laughs keep coming and the love keeps growing, as hit daytime show “Steve Harvey” reached new viewership heights for the week of October 28. Between October 28 and November 1, “Steve Harvey” delivered the highest number of viewers in the show’s history, as 2.35 million sought out Steve’s signature blend of comedy and common sense. During the same period, the show also scored its highest household rating to date with a series best national household rating of 1.8

“Viewers are continuing to discover our show in our second season and the authenticity and unique perspective that Steve brings to daytime,” said executive producer Alex Duda. “They are responding in record numbers to our mix of humor, heart and takeaway information and we look forward to continuing to deliver that every single day for our viewers.”

Recently nominated by the People’s Choice Awards as Favorite Daytime Talk Show Host, America’s favorite love and relationships guru Steve Harvey continues his second season with even more of what viewers have come to love – real people tackling the everyday topics that matter most in their lives: love, dating, relationships, parenting, personal style and more, all delivered with humor, heart and plenty of useful takeaway information. Upcoming episodes include Steve’s “Las Vegas Edition” featuring his biggest audience giveaway ever (Nov. 13), an all-male panel discussing Why Men Cheat (Nov. 15), and a special “Guess Who’s Coming to Dinner?” themed week the week of Nov. 18 when Steve surprises unsuspecting fans every day of the week. Plus, on Wednesday Nov. 20, Steve sits down for a one-on-one interview with Joel Osteen.

“Steve Harvey,” which has connected with millions with its blend of common sense advice and humor, is produced by Endemol USA with Steve Harvey, Alex Duda and Rushion McDonald serving as executive producers. The hit show is cleared in 98% of the country, including all of the NBC Owned Television Stations, and is distributed in national syndication by NBCUniversal Domestic Television Distribution. “Steve Harvey” is taped before a live studio audience at the state-of-the-art HD NBC 5 studios in downtown Chicago.

Web articles – via partners/network co-ordinators. This website and its contents are the exclusive property of ANGA Media Corporation . We appreciate your feedback and respond to every request. Please fill in the form or send us email to: [email protected]
Previous: Tom cruise : mission impossible 5 to Premiere Christmas 2015
Next: Phthalate exposure in pregnancy may increase preterm birth risk : Study