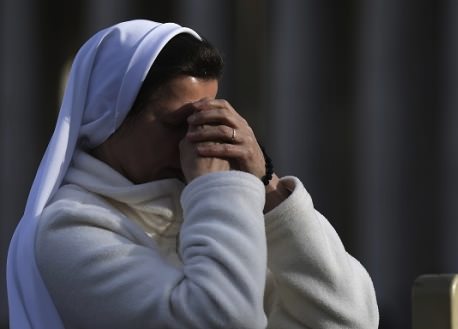 A shocked nun has given birth to a baby boy, and named him after Pope Francis.

The 31-year-old nun, who comes originally from El Salvador, was rushed to hospital from her convent in the Italian city of Rieti – only to find, to her huge surprise, that her ‘stomach pains’ were in fact labour pains.

The 31-year-old nun claims she had no clue she was with child, despite the baby weighing a healthy nine pounds at delivery. “I did not know I was pregnant. I only felt a stomach pain,” she was quoted as saying by Italian news agency ANSA.

Hospital officials have yet to explain how the nun became pregnant (because it surely couldn’t have been through sexytime), but a local pastor told reporters, “I guess she’s telling the truth when she says she arrived at the hospital unaware of the pregnancy.”

Her fellow sisters at the the unnamed nun’s “Little Disciples of Jesus” convent in Italy were quoted as saying they were “very surprised.” I bet.

ANSA reports that the nun decided to keep the baby boy named Francisco after the current pope. The hospital is currently taking donations.

Web articles – via partners/network co-ordinators. This website and its contents are the exclusive property of ANGA Media Corporation . We appreciate your feedback and respond to every request. Please fill in the form or send us email to: [email protected]
Previous: Couple advertises home as ‘slightly haunted’ (VIDEO)
Next: Longest execution with new drugs (VIDEO)