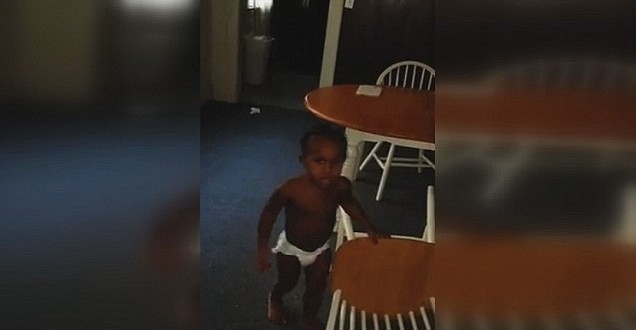 Omaha police say a toddler in a video posted online who was being encouraged to curse is now in protective custody.

The video contains profanity and discussions about sex and gang violence. While authorities found nothing criminal in the video, CPS and police removed the infant and three other children from the home yesterday over safety concerns.

Police said the City Prosecutor’s Office has determined no crime occurred in the video, which shows adults, who are off-camera, exchanging profanities and sexual comments with the toddler.
John Wells, the union’s president, has described the video as an example of how the cycle of violence and “thuggery” continues in the city.

In the video, a man jokingly directs profanity at the boy and asks him to curse back. The boy does and, at one point, raises his middle finger to the camera.

Willie Hamilton, executive director of Black Men United in Omaha, has said it is inappropriate for the police union to single out the child to draw sweeping conclusions about the cycle of violence.
Police investigators were able to identify the toddler in the video and the adults who are off-camera, said Lt. Darci Tierney, a police spokeswoman.

Child Protective Services was assisted in the investigation by the Police Department’s Child Victim Unit.

Web articles – via partners/network co-ordinators. This website and its contents are the exclusive property of ANGA Media Corporation . We appreciate your feedback and respond to every request. Please fill in the form or send us email to: [email protected]
Previous: New Jersey Gov Chris Christie fires aide in traffic-jam scandal
Next: Paranormal Activity: The Marked Ones (2014 movies)