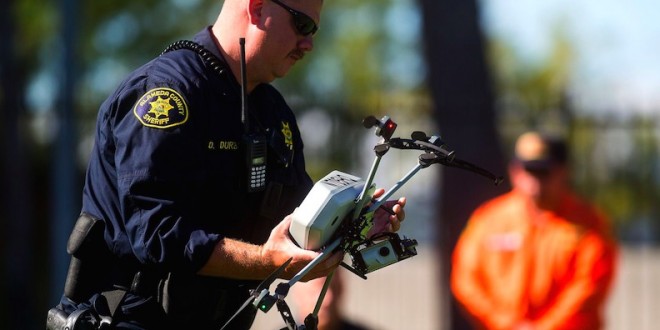 It is now legal for law enforcement in North Dakota to fly drones armed with everything from Tasers to tear gas thanks to a last-minute push by a pro-police lobbyist.

According to the Verge, Bill 1328 allows police to use tasers, tear gas, rubber bullets and other weapons that supposedly don’t kill on drones.

“Sponsored by Rep. Rick Becker (R-Bismarck), the bill was originally intended to limit the police’s surveillance powers, and banned all weapons on law enforcement drones,” writes the Verge. “Then a policy lobby group was allowed to amend the bill, though, at which point it only banned lethal weapons, writes The Daily Beast.”

“This is one I’m not in full agreement with,” Becker said at a hearing in March, The Daily Beast reported. “In my opinion there should be a nice, red line: drones should not be weaponized. Period.”

“When you’re not on the ground, and you’re making decisions, you’re sort of separate,” Becker added. “Depersonalized.”

Indeed. “Non-lethal” weapons are incredibly painful at best and can still kill at worst. Want a shock? Check out the Guardian‘s webpage called “The Counted,” which is dedicated to showing how many Americans are killed by police — 39 of those deaths were by taser.

There’s a reason why cities like Seattle are outfitting police departments with cameras to increase transparency and accountability.

Web articles – via partners/network co-ordinators. This website and its contents are the exclusive property of ANGA Media Corporation . We appreciate your feedback and respond to every request. Please fill in the form or send us email to: [email protected]
Previous: Burger King offers McDonald’s one day “McWhopper” peace deal (Video)
Next: New Fossil of extinct reptile could solve the mystery of lizard evolution