Home » World » Tesla Model 3 Could Get An Early Release (Video) 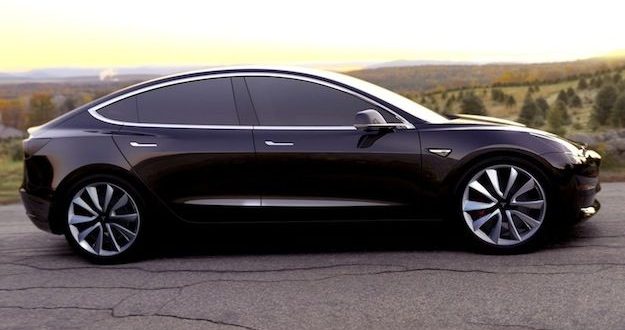 Tesla Model 3 Could Get An Early Release (Video)

Tesla Model 3 Could Get An Early Release (Video)

Tesla CEO Elon Musk teased the upcoming Model 3 on Friday, by posting a video on Twitter of the “candidate version” of the vehicle taking its “first drive.”

As we reported last week, Tesla started production of release candidate Model 3 vehicles, which are cars made almost entirely on production machines in order to test both the production process and the vehicles themselves.

As part of ‘Tweetstorm’ today, Musk shared a short low-resolution video of the Model 3.

Maybe there are some slight adjustments to the front fascia and headlights, but again, the video is very low-res and it’s hard to tell.

Here’s the video in question:

First drive of a release candidate version of Model 3 pic.twitter.com/zcs6j1YRa4

It’s the first time that we see the Model 3 in another color than silver, red, or matte black.

Web articles – via partners/network co-ordinators. This website and its contents are the exclusive property of ANGA Media Corporation . We appreciate your feedback and respond to every request. Please fill in the form or send us email to: [email protected]
Previous: Streaks on Martian slopes might not be caused by water (Research)
Next: Nova Scotia Man Named Grabher Just Wants His Customized ‘GRABHER’ License Plate Back