Home » World » Thousands will be without power until Friday, 2014 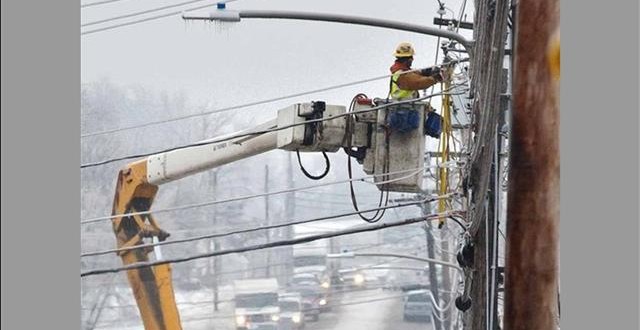 The ice storm that left thousands of Central Maine Power Co. customers without electricity this week — some for up to four days, including Christmas — could have been much worse, a company official said Friday.

And with a predicted nor’easter bearing down on the region later this weekend, year-long prevention plans by the state’s largest utility could pay off once again, according to CMP.

“Driving up my road earlier, there were trees just hanging down on top of the power lines,” said CMP customer Ina Hollins of Northport. She was in the dark for five days, and while her power has come back on now, she’s busy filling water jugs and making preparations should it go off again. Hollins said there are literally hundreds of branches broken or ready to break, and with six to fourteen inches of snow predicted for Sunday and Monday.

Officials with CMP estimate that their repairs should be complete for the most part by Saturday night.

In some of the hardest hit areas of Eastern Maine, some Bangor Hydro customers may not have their power back until Wednesday night.

“I know how difficult it is to be without power, particularly during the holiday season,” said Senator Susan Collins.

She was without power for several hours herself and she said she’s standing by to offer whatever assistance she can to help Maine’s utilities including smoothing the way for Canadian crews, which are currently en route from Nova Scotia to help with restorations. Collins said she advises anyone at risk from cold to seek shelter with organizations like the Red Cross, and to stay in touch with utility companies.

“Be patient and realize that every possible effort is being made,” Collins said.

And with more snow on the way, utility officials are advising Mainers to take some extra precautions, as bad travel conditions may further impede restoration times in the early part of the week.

Web articles – via partners/network co-ordinators. This website and its contents are the exclusive property of ANGA Media Corporation . We appreciate your feedback and respond to every request. Please fill in the form or send us email to: [email protected]
Previous: Delta Airlines Computer Glitch Offers Fares for $25 (VIDEO)
Next: Beyonce Dances with Sick Fan at Las Vegas Concert (VIDEO)