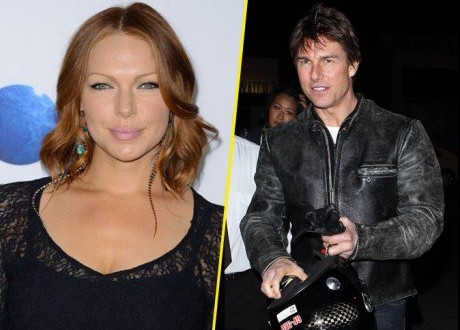 Tom Cruise and Laura Prepon may be dating according to this report. They’ve apparently known each other for a while but Tom became interested after watching Orange Is the New Black (read: that opening shower scene). He took her on a date at The Manor Hotel in LA, a place Scientologists like to dine at, and even picked her up in a vintage car, her favorite.

A source told the new U.K. issue of Grazia magazine: “Tom has known Laura for a few years now and they are all in the same social group that includes John Travolta and his wife Kelly Preston.

“He’s always been fascinated by her and, since seeing her in Orange Is The New Black, that has turned into an attraction. So he bit the bullet and asked her out on a formal date.”

Cruise, 51, and Prepon enjoyed their first and second dates at a restaurant in The Manor Hotel, a Scientology retreat, and the actor is said to be “smitten” after pulling out all the stops to impress the 33-year-old beauty.

The source continued: “It may seem like an odd choice but it’s a top restaurant called the Renaissance serving French/Californian cuisine.

“He had her picked up in a vintage car, knowing it was one of her favourites, and had pre-ordered a vintage bottle of 1979 Merlot, which was on the table when she arrived. They spent three hours laughing and joking. It’s clear Tom is smitten and after the date he was on cloud nine.”

Web articles – via partners/network co-ordinators. This website and its contents are the exclusive property of ANGA Media Corporation . We appreciate your feedback and respond to every request. Please fill in the form or send us email to: [email protected]
Previous: 76 percent of sikhs live in northern india State of Punjab
Next: Nigeria bottles of beer, smashed by Islamic police (VIDEO)