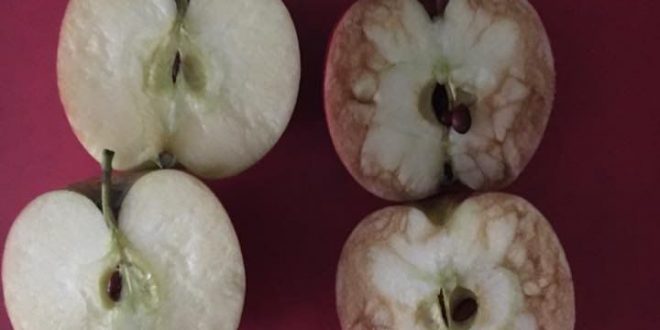 The two fruits looked the same on the outside – smooth, shiny and red – but there was much more going on beneath the surface than met the eye.

Rosie Dutton tours schools teaching children about relaxation and mindfulness. On Tuesday evening, she posted on her Relax Kids Tamworth Facebook page about a lesson she’d taught children about the devastating impact bullying can have.

“Today in one of our classes I introduced the children to two apples (the children didn’t know this, but before the class I had repeatedly dropped one of the apples on the floor, you couldn’t tell, both apples looked perfect),” Dutton wrote in the post, which has been shared more than 150,000 times.

“We talked about the apples and the children described how both apples looked the same; both were red, were of similar size and looked juicy enough to eat.”

What happened next: Dutton took the apple she’d dropped on the floor and said mean things to it — that it was disgusting, ugly and that its stem was too short. Then she passed the apple around the room, instructing the students to do the same.

Next, Dutton passed around the apple that hadn’t been dropped on the floor. With this apple, everyone in the room doled out compliments.

The big reveal: Finally, Dutton cut the apples open. The apple that had received compliments was “clear, fresh and juicy” inside, while the “bullied” apple was bruised and mushy.

“I think there was a lightbulb moment for the children immediately,” Dutton wrote. “They really got it, what we saw inside that apple, the bruises, the mush and the broken bits is what is happening inside every one of us when someone mistreats us with their words or actions.”

Thankfully, unlike apples, humans have the power to do something about bullying, Dutton pointed out. We can teach kids to be kind and to stand up for one another.

“More and more hurt and damage happens inside if nobody does anything to stop the bullying,” she wrote. “Let’s create a generation of kind, caring children.”

Web articles – via partners/network co-ordinators. This website and its contents are the exclusive property of ANGA Media Corporation . We appreciate your feedback and respond to every request. Please fill in the form or send us email to: [email protected]
Previous: NASA to Assess 2nd Ground Qualification Test for SLS Rocket Booster, Report
Next: Germany shooting: Police Kill Gunman, Ending Cinema Hostage Drama