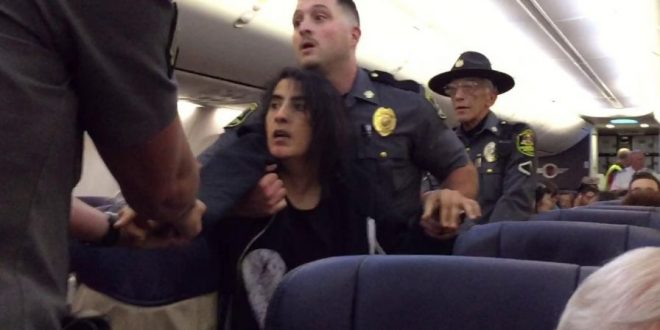 A woman was physically pulled off a Southwest Airlines flight Tuesday night after claiming she was severely allergic to two dogs on the plane.

According to Southwest Airlines, initial reports indicate that the customer in the video stated that she had a life-threatening pet allergy but was unable to provide documentation necessary to complete travel. Two dogs were on board the flight.

According to Southwest Airlines, their flight staff asked the woman to exit the aircraft several times and she refused. The woman was then forcibly removed by law enforcement.

Southwest Airlines issued an apology to the woman that says:

“We are disheartened by the way this situation unfolded and the Customer’s removal by local law enforcement officers. We publicly offer our apologies to this Customer for her experience and we will be contacting her directly to address her concerns. Southwest Airlines was built on Customer Service, and it is always our goal for all Customers to have a positive experience.

Initial reports indicate the Customer in the video stated that she had a life-threatening pet allergy, but she was unable to provide the medical certificate necessary to complete travel. There was one emotional support animal and one pet onboard the aircraft. Our policy states that a Customer (without a medical certificate) may be denied boarding if they report a life-threatening allergic reaction and cannot travel safely with an animal onboard. Our Flight Crew made repeated attempts to explain the situation to the Customer, however, she refused to deplane and law enforcement became involved.”

Web articles – via partners/network co-ordinators. This website and its contents are the exclusive property of ANGA Media Corporation . We appreciate your feedback and respond to every request. Please fill in the form or send us email to: [email protected]
Previous: Does coffee’s caffeine protect against Parkinson’s Disease?
Next: Gravitational waves detected for fourth time by astronomers